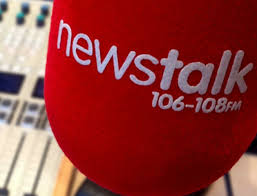 It’s a long time since Newstalk ditched the pretence of balance when it comes to discussing the abortion issue.

What do you resort to as a news station when you’ve abandoned fair and impartial reporting? The answer is you keep sinking lower and lower.

Just when it felt like media outlets had exhausted every insult against pro-life people, Newstalk’s Tom Dunne stepped forward this week to prove us wrong.

As the deputising host of the Moncrieff Show on Newstalk, Dunne interviewed Caroline Reilly from the US based Rewire News Group about her work as a “reproductive rights advocate” and her concerns about the “link between anti-abortion groups and white supremacists” in the US.

For the entire 11-minute segment, Dunne fed and facilitated a wholly bigoted and unjust attack on the entire pro-life movement. His guest made it clear to listeners: if you support the pro-life position in any shape or form, you’re a racist white supremacist. Full stop. End of story.

She was also given complete free rein by Dunne to paint a distorted picture of pro-life activism and the motivations of those who join the movement. She cited examples of violent attacks perpetrated by anti-abortion activists in the US and gave the impression to listeners that they are regular occurrences even though, thankfully, they are not. Whenever incidents like this have happened in the past, they have been immediately repudiated and condemned in the strongest terms by the entire movement. The people who tuned into this week’s broadside on Newstalk, however, were spun a very different story.

Ms Reilly was allowed continue her diatribe and claim that for people who oppose abortion “it really isn’t about abortion the procedure, it’s about the right to control who can and can’t become a parent, or how someone becomes a parent, and that has deeply rooted ties to early eugenics and that sort of philosophy.” Yes, you read that correctly, she actually had the audacity to accuse the pro-life movement of supporting eugenics!

When Dunne didn’t stop her there, she kept going: “So, you know, there really is no way to distinguish anti-abortion sentiment from White Nationalism because to be anti-abortion is to support the inability for someone to choose how and when they become a parent, which inevitably results in a eugenicist outcome.”

There really are no words for the absurdity and irony of what Dunne allowed his guest to say without challenge.

Only last month, pro-abortion group Marie Stopes International changed its name to MSI Reproductive Choices, to distance itself from its founder’s racist and eugenic beliefs.

Last year, the New York branch of Planned Parenthood, the largest abortion provider in America, publicly acknowledged that their founder Margaret Sanger was also a leading promoter of eugenics and racist practices.

The truth is that eugenics was a foundational pillar of the pro-abortion movement. The pro-life movement on the other hand has always campaigned against eugenics and championed the unique and irreplaceable value of every human life.

Regarding the spurious charge that the pro-life movement has close ties with white supremacy, as Emmy Award-winner, Ryan Bomberger, told the Pro Life Campaign National Conference last October, Planned Parenthood is the “very definition of systemic racism” in the US.

Ryan, who is African American himself, cited the horrifying statistic that 79% of abortion clinics in the US are located in predominantly black neighbourhoods and how in New York City for the past several decades, more black babies have been aborted in the city than born alive. These are all inconvenient truths that Tom Dunne didn’t want listeners to hear on his show.

It is understandable that some pro-life people become disheartened with the relentless and unfair attacks. But the truth is we should never give up hope. The reason our opponents have abandoned fair-minded debate and resorted to insults and smears, is because they lack confidence in the strength of their argument in support of abortion and don’t want to be placed in a situation where they’re forced to defend it.

We need to hold our nerve and continue to fight for what we know to be true, regardless of how we’re attacked. It will take time, but the truth will shine through and win out in the end.