25.09.2020 – Tóibín challenges government again over its silence on cultural genocide in China 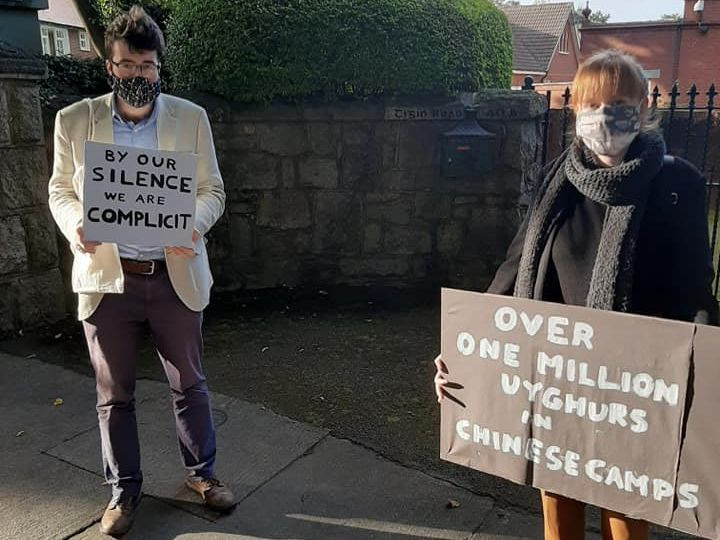 On Wednesday, members of Ógra Aontú held a protest outside the Chinese Embassy in Dublin over the treatment of the Uyghur population in China, where a cultural genocide is taking place, including forced abortions and sterilisations of Uyghur women on a massive scale.

Aontú Leader, Peadar Tóibín, who attended the protest outside the embassy raised the matter later that evening in the Dáil with the Minister for Foreign Affairs Simon Coveney.

Addressing the minister, Deputy Tóibín said: “I will make two small points in the time I have left. I attended a protest outside the Chinese embassy today concerning the treatment of the Uyghur people. I do not believe that the Government is using its voice strongly enough to oppose the horrendous things happening in that part of the world. People are being forced into thought camps, there is forced abortion and sterilisation and people are going missing. It is very important that we do not just speak through the UN on this issue, but that we raise our voice regarding human rights. Human rights are universal, and not for particular countries. They are for all countries.”

In July, Deputy Tóibín circulated a letter to Oireachtas colleagues in the Dáil calling on them to join him in pressuring the Government “to urgently intervene and make Ireland’s opposition to this torture known, and to lobby other western and European countries to join us in condemning these practices”.

Several TDs and Senators from Fianna Fáil, Fine Gael, the Social Democrats, Greens and Independents signed the petition. To date, the Government has refused to publicly condemn the genocidal actions of Chinese authorities. Their line about using diplomatic channels to convey their concern doesn’t cut it. There is simply no justification for the Government’s refusal to speak out clearly and plainly against one of the most egregious human rights abuses of our time.