24.02.2016: Labour’s abortion proposal would lead to abortion on demand and does nothing to empower women 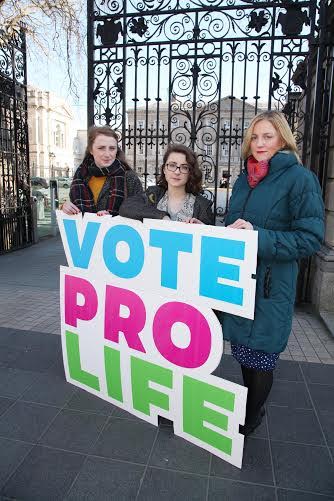 The Pro Life Campaign has said the Labour Party’s election proposal on abortion amounts to abortion on demand and does nothing to empower women. The PLC’s Deputy Chairperson Cora Sherlock was commenting on the Labour Party’s position at an event outside the Dáil today, in advance of Friday’s General Election.

Commenting on Labour’s policy on abortion, Ms Sherlock said: “No amount of euphemistic language from Labour can disguise the fact that what they are proposing is identical to the abortion regime that exists in England, where all respect for unborn human life has been completely stripped away. For example, in England, 90% of babies diagnosed with Down’s Syndrome are aborted.

“As a society, I think we need to reflect on the horror of what is contained in Labour’s proposal and the total disregard it shows towards innocent and defenceless human life. Voters deserve to know what a vote for Labour would mean on the abortion issue.”

Ms Sherlock also commented on Taoiseach Enda Kenny’s idea of setting up a citizen’s convention after the election to look at the issue. She said the citizen’s convention proposal “has all the appearances of a repeat of what happened in advance of the abortion legislation in 2013. Back then, the Taoiseach initiated Oireachtas Hearings, then ignored the expert medical evidence presented to them and instead caved in to Labour’s demands for abortion to be introduced. Not once has the Taoiseach defended all that is positive about the 8thAmendment and the fact that there are thousands of people alive today because of our pro-life laws.”

Ms Sherlock said: “There is nothing liberal or life-protecting about Labour’s proposal. It is the same tired, clichéd and inadequate response that led to wide-ranging abortion in other countries. What is being proposed would do nothing to empower women or meet their needs when faced with an unexpected pregnancy. Many women who regret their abortions say that all it would have taken is for one person to have offered them support and encouragement and they’d have continued with their pregnancy. Labour’s proposal is the opposite of empowerment and freedom. In the name of ‘choice’ it pretends there is no social or emotional cost involved in going through with an abortion. That is a total betrayal of women.

“Despite all the criticism, the 8th Amendment was a milestone in human rights when introduced. As the debate develops and pro-life stories start to get a hearing, I’ve no doubt more and more people will see the value of retaining the 8th Amendment. This Friday, however, Ireland’s pro-life laws hang in the balance. Before voting, we encourage voters to take note of where candidates in their area stand on the right to life. They can do so by checking the Pro Life Campaign’s website www.prolifecampaign.ie.”