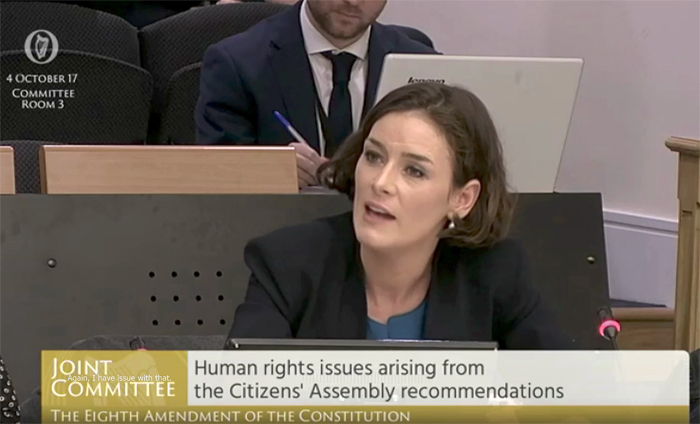 Comments have caused “hurt and distress” to many – Sherlock

The Pro Life Campaign has called on Deputy Kate O’Connell to retract comments she made last week at the Oireachtas Committee where she took issue with Deputy Peter Fitzpatrick when he raised adoption as a positive alternative to abortion.

“Are we going into a ‘Handmaid’s Tale’ situation here, where women in crisis pregnancies will be detained, forced to become parents, and used as a source of supply of babies to childless people?  I have to say it’s up there with the most shocking thing I’ve heard today and I’m hoping to God nobody forces me into that situation.  Good luck to ye if you do.”

“Deputy O’Connell’s comments have no place in any discussion, let alone one where sensitive issues like adoption and abortion are raised.  Since she made her remarks, we have been contacted by many people who were deeply hurt by the flippant way in which she appeared to disparage adoption, something which involves courage and generosity of spirit regardless of whether you are the birth or adoptive parents.

“It was disturbing to see Deputy O’Connell compare efforts to highlight our need to improve and streamline the adoption process in this country to a dystopian science fiction novel.  Perhaps in the Deputy’s eyes, adoption is so far removed from the current debate that it might as well be part of a fictional piece of writing.  The reality however is that she has unwittingly shown that this Committee has no interest in looking at any alternatives to abortion, only in fast-tracking a referendum at all costs.

“We had hoped that this matter would be raised by the Committee Chairperson at yesterday’s session.  As this did not happen, we now call on Deputy O’Connell to retract her comments and to apologise for the hurt and distress that she has caused.”