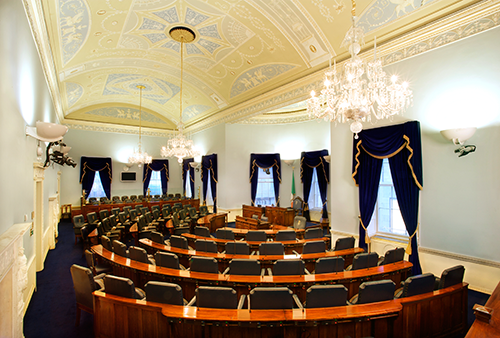 The Abortion Bill passed through Seanad Éireann yesterday evening, 13th December 2018.  As no amendments were accepted at Seanad stage, the Bill has now completed its journey through the Oireachtas and will become an Act of Parliament and the law of the land once it is signed by the President.

Any lingering hopes that the Minister for Health, Simon Harris, might have been persuaded to acknowledge the reality of the unborn child were crushed under an avalanche of evasion and denial.

His allies in the Seanad have thus enabled him to enact legislation that is catastrophic in its reach and chilling in its intent.

The Seanad leg of the debate lasted only four days with a marathon 12 hours of discussion on Tuesday 11th.

Despite provocation and personalised attacks, Senators Rónán Mullen and Briain Ó’ Domhnaill were steadfast and heroic in their presentation of the case for humane amendments to a Bill that obliterates the right of babies to be born and the right of their mothers to know them.

We thank the co-sponsor of the amendments, Senator Paul Coghlan and those Senators who through the course of the debate spoke and voted in favour of some of the Amendments.

They did so knowing that this represented the last opportunity our legislators had to limit the extreme nature of the Bill and to insert some kind of proportionate and reasonable protections for the unborn child; for example, the right to pain relief before termination.

On the first day of the Seanad debate, Monday, 10 Dec 2018, clear indications were given that no reason, no impulse toward genuine compassion and no amount of pleading was going to pierce the abortion logic that the Minister and his allies put forth with such unyielding force.

The first to speak was Senator Lynn Ruane, who sought to further extend the grounds on which abortions may be obtained, namely socio-economic grounds. This would be the constant theme of the pro-choice amendments over the course of the Seanad debate, because for the pro-choice Senators who sought amendments, even this barbaric the Bill did not go far enough.

Instead they asked; why should we wait three days before ending a human life? Why should we offer a woman the opportunity to hear a foetal heartbeat? Why must we seek the informed consent of the woman to avoid abortion regret? Why should we notify a parent when a minor has an abortion and why oh why should we even consider pain relief for the unborn child about to have its tiny life ended?

All of these issues and more were derided and misrepresented as attempts to limit access and ‘shame women.’

Minister Harris began his time in the Seanad by launching into a self-congratulatory assessment of how splendid the roll out of abortion services was coming along.

No matter how frequently it was pointed out to him over the course of the four days that the deadline for the introduction of services was dangerous and a threat to woman, he simply dismissed these remarks as ‘political’ and not worth the effort of his time.

Something profoundly cold and inhumane has entered Irish politics under the guise of ‘freedom’ and ‘choice’. A real darkening of sensitivity has taken place. Empathy it now seems is a political liability.

The Committee debates, the Dáil debates and finally the Seanad debates have only served to confirm this.

But do we lose heart? Absolutely we do not.

We extend our compassion not just to the unborn and the rights of mothers. We extend it to all those blinded by the pervasive and triumphalist logic of abortion ‘rights’ and a system that ignores the reality of the unborn child and whose only message to women in crisis is to end the life of their children in the womb.

“Even when a majority is strongly against, the thing about the pro-life message is that, because it is rooted in something that is good and beautiful, it always has new ambassadors as each new generation comes forward. It is my hope, and something I see in these young people, that they are not out to divide.

“They are out to bring people together in a search for solutions that are inclusive, respectful of women, men and people born and unborn. There will be civil rights activism in the name of that important civil right that is conscientious objection. I refer to a person’s right to go his or her way peacefully, to do no harm to others and not to be caught up in processes that are unjust and do harm to others.

“We have reached the end of this phase. We have lost something, noble, good and productive. I am sad to say that, in the short term, we will see the negative fruits of the repeal of the eighth amendment and the legislation that has followed. I already see, however, the early light of the bright new dawn that is ahead.”

Our work continues but it is different. Join us and we will walk to that new dawn together.

You can watch Senator Mullen’s closing speech by clicking below 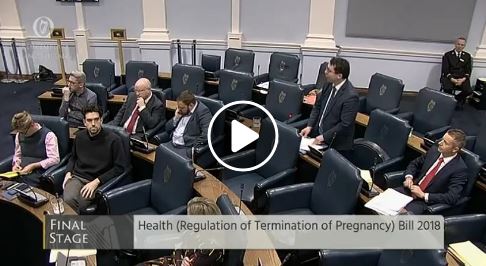 Please note just 32 of the 60 Senators were present.  If your Senator is not mentioned below, he/she was absent.