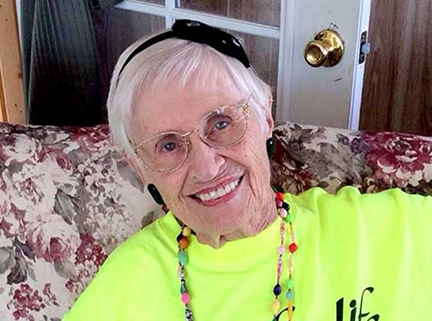 Virginia Evers, committed pro-life activist and creator of the well know ‘precious feet’ pin has died aged 99. She had a connection to Ireland, as the pin she created was designated the international pro-life symbol at a symposium in Dublin in 1979.
This pin depicts the size of an unborn baby’s feet at 10 weeks old, and is worn by many pro-life advocates as a way to remind people of the humanity of the unborn child.
Evers and her husband founded a non-profit organisation, Heritage House, in the USA. The ministry was started in 1974, around the time that abortion was legalised by the US Supreme Court in Roe v Wade. When Evers saw a picture in a Californian newspaper of the feet of a ten week old foetus, she decided to create a lapel pin.
Her organisation now sells precious feet pins and other pro-life memorbilia to raise money for worthy pro-life causes. Since the first precious feet pin was first created, over 11 million have been distributed worldwide.
Picture credit – https://www.nationalrighttolifenews.org/2020/07/she-spread-the-pro-life-message-until-her-last-breath-creator-of-the-precious-feet-pin-dies-at-99/