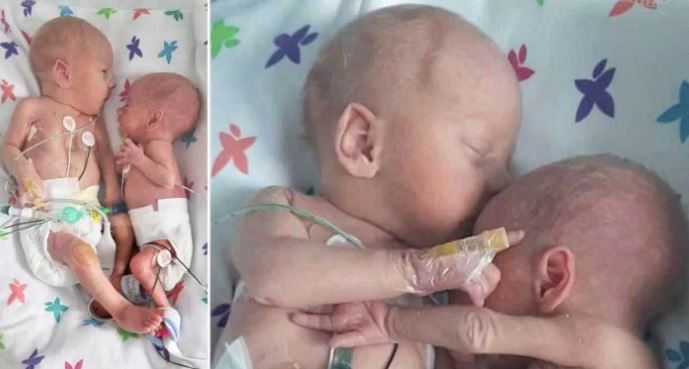 Laura Hough has described it as “the best day of her life” when her newborn twins were reunited a fortnight after doctors said one of the babies “would not make it”.

Laura was 30 weeks pregnant when her baby boy and girl were delivered via emergency C-section in Liverpool. Babies Neve and Louie were immediately separated into different units of the hospital to receive medical care.

Doctors initially indicated that baby Neve was not likely to survive the pregnancy but after the C-section it was baby Louie who struggled most after his lungs collapsed.

After two weeks of separation, the twin babies were eventually reunited and immediately began cuddling and holding hands.

Proud mum Laura said watching her babies reunited left her “filled with love” and made it “the best day of my life.”

“It was horrible when they were separated at birth, but I cried tears of joy when they got back together,” she said. “They were wrapping their legs around each other and cuddling, even holding hands at one point. They were so cute.”

She thanked the hospital staff in Liverpool, whom she called “absolutely brilliant” for working to save both babies’ lives.