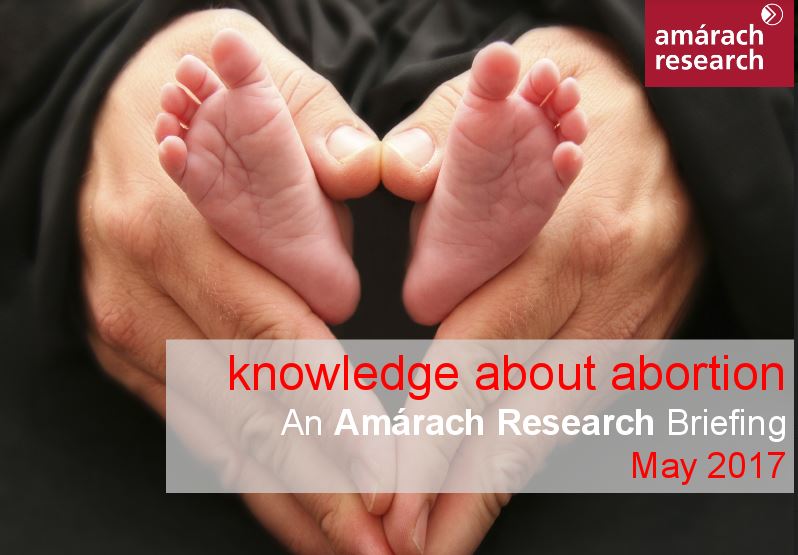 The Pro Life Campaign has said that with most of the focus of the abortion debate on repeal of the 8th Amendment, the public “are being deprived of the opportunity to consider what precisely legalised abortion would involve.” The group was commenting following the release of new Amárach research showing that most of the public are totally unaware of basic facts regarding what legalised abortion has led to in countries like our nearest neighbour, England.

Commenting on the findings of the latest research, Dr Ruth Cullen of the Pro Life Campaign said: “It is extraordinary how little time is devoted in the debate to what legalised abortion has led to in other countries. When proposing changes to the law, particularly changes as radical as those being proposed on abortion, the first thing you’d expect any Oireachtas committee to do is look at what similar changes have brought about in other countries. But the Oireachtas Committee currently recommending changes to Ireland’s abortion law has scrupulously avoided talking about abortion itself and the changes that inevitably occur when it is legalised. With almost the entire focus of the debate on repeal of the 8th Amendment, the public are being totally deprived of the opportunity to consider what precisely legalised abortion would involve and the devastating impact it has had in other countries.

Dr Cullen said “it is farcical beyond words that 27 groups and individuals advocating abortion have been invited as witnesses before the committee with just 3 pro-life individuals invited. The fact that leading US pro-abortion group Center for Reproductive Rights (CRR) are attending the committee as ‘expert’ witnesses this week is ludicrous. CRR is actively fundraising at present in the US to change Ireland’s abortion laws and yet they qualify as impartial experts while families of children saved by the 8th Amendment are turned away. It doesn’t matter how much their friends in the media try to prop it up, the credibility of this committee cannot be restored.

Dr Cullen concluded: “There’s one thing the public don’t like and that’s being taken for fools. That is precisely what is happening at present.  When people are given a more balanced presentation of the issues, I am confident that support for keeping the 8th Amendment will grow considerably.”

The Pro Life Campaign commissioned Amárach to carry out the research earlier this year. The questions were included in Amárach’s monthly online omnibus poll of 1,000 adults aged 16 and over. The research reported here is based on findings from omnibus fieldwork conducted in May 2017.