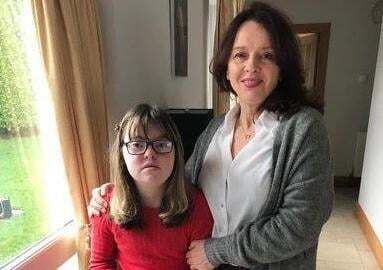 The Dungiven mother granted permission by the High Court in Belfast to intervene in a challenge to the new abortion law in Northern Ireland has said she’s appalled at the way she and her daughter have been treated by Prime Minister Boris Johnson and Northern Secretary Brandon Lewis, and the way they have gone about imposing abortion on the people of Northern Ireland.

Rosaleen McElhinney, whose daughter Cara Rose has Down syndrome voiced her upset and concern in The Irish News newspaper, where she talked about the discriminatory abortion law in Northern Ireland that permits abortion up to birth when an unborn baby is detected with Down syndrome or any other disability.

Ms McElhinney said: “It is bad enough to take action to allow others to engage in discriminatory and eugenic practices. It is something else for the British government to actually intervene on a devolved matter to take to themselves the right to commission discriminatory and eugenic practices because, very properly, the Northern Ireland health minister has refused to commission abortions on this basis.

“My daughter is shielded from the psychological scars of what the law says because she is too young to process their implications. But I know that at some point she will become aware and I am deeply concerned about the impact on the way she sees herself with respect to her own mental health. In this context, as a responsible mother, I can no longer sit back. I look forward to intervening in the upcoming case and I very much hope that the courts will strike down the 2021 Regulations. They have no place in Northern Ireland – or indeed anywhere else – in 2021.”

Rosaleen McElhinney deserves great credit and all our support for the bold and courageous way she is standing up for her daughter and for the rights of everyone with a disability born and unborn.

The court case is due to begin in October.