The introduction of a pro-life Bill in the Dáil earlier today represents a hugely important and encouraging development.

The ‘Foetal Pain Relief Bill 2021’ which was introduced by Independent TD Carol Nolan and is co-sponsored by ten other TDs will ensure that unborn babies during late-term abortions are given pain relief and that no baby dies experiencing excruciating pain or discomfort from the abortion procedure.

Deputy Nolan and the other co-sponsors of the bill are to be warmly congratulated for courageously moving forward with this proposal. It is a humanitarian bill that should be supported by every parliamentarian of goodwill.

The bill won’t end late-term abortions, but it will introduce a modicum of compassion towards unborn babies whose lives are being ended by abortion.

Any attempts to depict the bill as “controversial” should be rejected and called out since the purpose of the bill could not be clearer. If passed into law, it will ensure that unborn babies are given pain relief before late-term abortions and nothing more. If such a bill is deemed controversial by some, then it speaks volumes about the thinking and state of public discourse in certain sections of the community.

Speaking in the Dáil earlier today when introducing the bill, Deputy Nolan said: “The infliction of unnecessary and avoidable pain on human beings – especially on those with no capacity to resist – is something all compassionate societies should seek to avoid.

She continued: “This brings me to the subject matter of the bill – the issue of pain felt by unborn children in the womb in the context of surgical abortion procedures. Medical science has known for some time that unborn babies can experience pain from 20 weeks gestation. However, an increasing body of scientific research from about 2007 onwards has suggested that the brain and nervous system develop at a rate which means that unborn babies may feel pain as early as 13 weeks. The latest such study was published just last year in the Journal of Medical Ethics.”

Deputy Nolan is correct that the scientific evidence clearly shows unborn babies feel pain. It is also a fact that late-term abortions are taking place in Ireland since the law changed in 2019 and doctors are undergoing training in how to perform gruesome late-term dismemberment abortions. There is absolutely no justification in having a law (Animal Health and Welfare Act 2013) that compels vets to administer pain relief to animals during any procedure that might cause them pain or distress and not having a law that ensures unborn babies are at least treated with the same mercy. The way politicians in the main political parties respond to the foetal pain bill in the coming weeks will be very telling. Let’s hope for once that politics is put to one side and that our elected representatives err on the side of compassion and dignity.

In her concluding remarks to the Dáil, Deputy Nolan said that “as human beings, and as legislators” we cannot stand by and ignore the evidence that unborn babies feel pain.

It would be a nice gesture for pro-life supporters to set aside a few minutes and send a quick email or note of thanks to the 11 TDs who have stepped forward to sponsor this humane and hugely important bill.

You can view the Bill and Explanatory Memorandum here 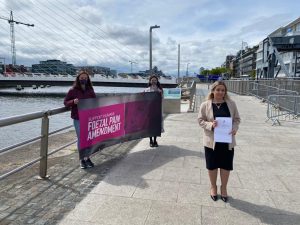