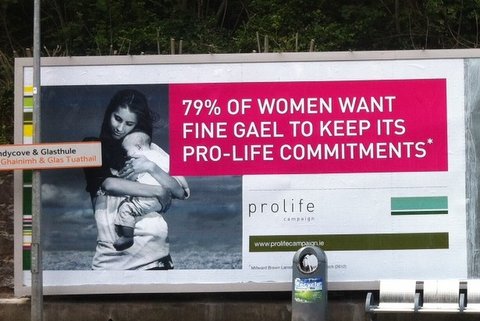 The Pro Life Campaign have this week launched a billboard campaign highlighting the findings of its most recent opinion poll.

The latest Millward Brown Lansdowne polling research on life issues shows strong public backing for the pro-life commitments made by Fine Gael prior to the general election in 2011. The research also reveals significant public support for current medical practice in Ireland where there is a duty of care towards the baby when intervening in pregnancy to save the mother’s life.

Just prior to polling day in the 2011 General Election, Fine Gael said it was opposed to the legalisation of abortion and experimentation on human embryos. It said that Fine Gael’s representatives would bring to the proposed all-party committee a clear commitment that women in pregnancy will receive whatever treatments are necessary to safeguard their lives, and the duty of care to preserve the life of the baby will also be upheld.  Would you agree or disagree with this commitment?

Overall, of those who expressed an opinion, 80% agreed with the commitment and 20% disagreed.  In Connacht/Ulster which includes the Taoiseach’s constituency of Mayo, 87% agreed and only 13% disagreed.

The second question was worded as follows:

Current medical practice in Ireland does not allow the deliberate killing of the unborn baby.  In a crisis pregnancy situation, the doctor has a duty of care towards the baby when intervening to save the mother’s life.  Do you consider that this ethical practice should be protected by law?

78% of those who expressed an opinion said it should and 22% disagreed.  There was majority support in all ages, social classes and regions.

Commenting on the poll findings, Dr Berry Kiely of the Pro Life Campaign said: “When the ethical distinction between induced abortion and necessary medical interventions in pregnancy is clarified in polling questions, the true strength of public opposition to abortion is revealed. The latest poll findings bear this out and are immensely reassuring from a pro-life perspective.”

Referring to the speech by Minister for Health, James Reilly in the Dáil during the recent Private Members’ Bill on abortion, Dr Kiely said,  “The Minister for Health’s speech alarmed pro-life supporters and he has a responsibility to clarify his position and that of Fine Gael”.

In his speech Minister Reilly said that the previous six governments had failed to legislate for the X Case decision but that the present Government “will not be the seventh.”

In response to this, Dr Kiely said, “It is clear from the Minister’s remarks that he does not expect the “Expert Group” on abortion to list as one of its options ways of complying with the European Court of Human Rights decision in A, B and C v. Ireland, that afford legal protection to both mother and baby in pregnancy. This completely undermines Fine Gael’s solemn pre-election commitment opposing abortion legislation and pledging that “women in pregnancy will receive whatever treatments are necessary to safeguard their lives and the duty of care to preserve the life of the baby will also be upheld.

“Legislation based on the X Case would amount to abortion on demandas the judges heard no medical evidence and set no time limits for when an abortion could take place. In addition the recent European court decision in A, B and C v. Ireland does not oblige us to introduce an abortion regime.

“Instead of repeating pro-abortion claims, the Minister for Health needs to acknowledge that Ireland, without abortion, is the safest country in the world for pregnant women as recognised by the UN and World Health Organisation. The Minister also needs to clarify Fine Gael’s stance on abortion in light of his recent speech in the Dáil”, Dr Kiely concluded.