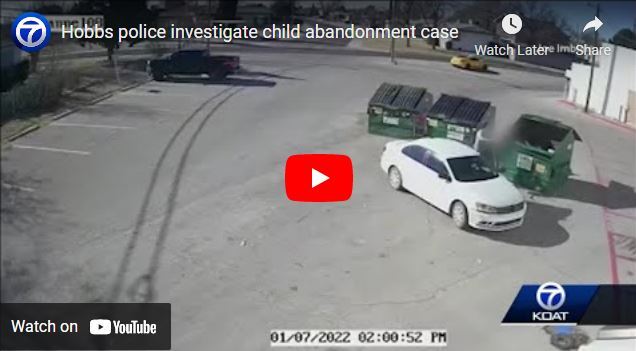 A young mother is facing charges in the US after she put her newborn baby into a trash bag and threw it into a skip outside a shop in Hobbs, New Mexico. The baby boy was in the skip for more than 5 hours before being rescued by people who heard what sounded like a baby crying when they happened to be searching through the skip for valuables.

According to a local news outlet, an 18 year old woman admitted leaving her baby in the skip after security footage from the shop clearly recorded the incident happening.

The young mother now faces first-degree felony charges of attempted murder and child abuse. The baby boy was taken to a local hospital and is reported to be doing well. Had he not been found at the time he was, authorities said he would unlikely have survived more than a few hours longer in the conditions he was found.

There has been lots of media coverage and commentary on the story in the US. Click here to watch one of the media reports.