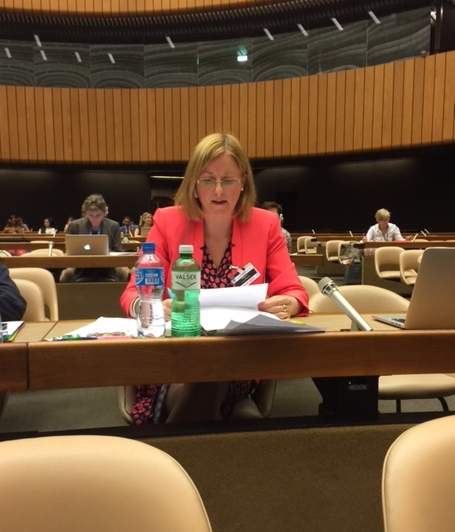 Today Cora Sherlock, Deputy Chairperson of the Pro Life Campaign gave a presentation to the United Nations Human Rights Committee in Geneva where Article 6 (The Right to Life) of the International Covenant on Civil and Political Rights was being discussed.

In her submission this morning Ms Sherlock said that claims by some commentators that human rights treaties can be interpreted to allow a right to abortion was completely without foundation.  She said:

“The right to abortion is not supported by the 1948 Universal Declaration on Human Rights which recognises the right to life, liberty and the security of the person. Additionally, the Convention on the Rights of the Child states in its Preamble that the Child ‘needs special safeguards and care, including appropriate legal protection, before as well as after birth’”

“The unborn child is a living human being and is entitled to all of the same rights as other members of the human family. It does not make sense to remove the fundamental right to life from an entire group of human beings. I hope the Human Rights Committee will reflect on its duty to comply with the provisions of the International Covenant on Civil and Political Rights which when properly applied should act to protect human life especially the most vulnerable.”

Speaking about her experience at the UN in Geneva today, Ms. Sherlock said it was devastating to hear about the millions of lives that have been lost to abortion and the effect that abortion had on women.

“Throughout the morning we heard testimonies from groups like Silent No More who spoke courageously about how abortion has damaged their lives.  One woman broke down in tears when speaking of how she regretted her abortion. Another participant called for a minutes silence for the millions of babies who have lost their lives to abortion. It was a chilling reminder of the number of people who have not been given the chance to be born.”