It’s exactly a year since the Government introduced abortion in Ireland. The Government’s misleading presentation of the law as a life-saving measure has resulted in widespread public confusion over what the new law actually involves.

The Pro Life Campaign has devised the Simple Truth campaign to give a balanced spin-free take on what precisely the new abortion law entails. To help get the word out, please take a minute and share the link to this page with family and friends via email, Facebook and/or twitter. The hash tag is #simpletruth. Thanks for all your help 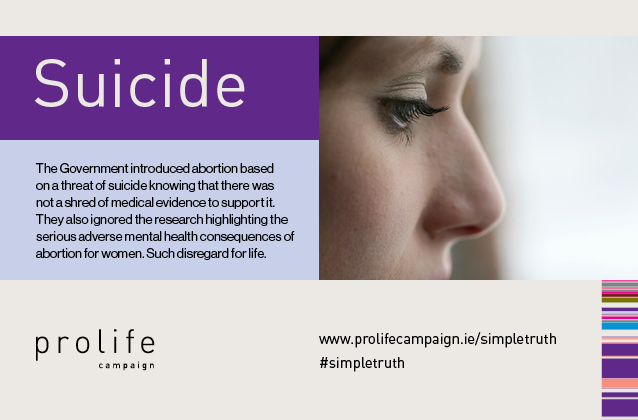 [showhide type=”post1″ more_text=”Read more…” less_text=”Read less…”] The Government’s argument that abortion is necessary to treat threatened suicide in pregnancy was demolished at the exhaustive Oireachtas hearings on abortion in 2013. The psychiatrists who addressed the hearings were unanimous that abortion is not a treatment for suicidal ideation.

Despite knowing all this, the Government pressed ahead and introduced abortion in the case of threatened suicide. The decision to do so revealed an unbelievable disregard for the lives of expectant mothers and their unborn babies.

Under the new law, for an abortion to be approved on the basis of a threat of suicide it requires two psychiatrists and an obstetrician to sign off on it. In reality, however, it will be the two psychiatrists who make the final decision. If they are in agreement, the obstetrician’s opinion will be redundant. We have seen how the requirement to have the signatures of two doctors in Britain has been widely abused, to the point where they have an abortion on demand regime.

There is nothing in the new law here to prevent psychiatrists who view abortion as harmless from seeking like-minded colleagues to affirm the certification for an abortion.

The result is that healthy pregnant women, who do not suffer from any mental illness, can access abortion where they threaten to kill themselves and their case is handled by psychiatrists who do not believe abortion has any adverse consequences or who believe abortion is a woman’s right.

The Government’s repeated assurances that the law is somehow restrictive are meaningless. The only thing that matters is what’s in the Act, and what’s in the Act is abortion on potentially very wide grounds.

“There are significant concerns in all areas of the medical profession in relation to this Bill when it comes to suicidality. Our overriding concern relates to the lack of evidence to show that termination of pregnancy is an appropriate treatment for women who are deemed to be at risk of suicide. As obstetricians we are expected to practice evidence-based interventions and first and foremost to do no harm.”

Dr Sam Coulter Smith, Master of the Rotunda Hospital, at the Oireachtas Hearings on Abortion, Friday 17th May 2013
[/showhide] 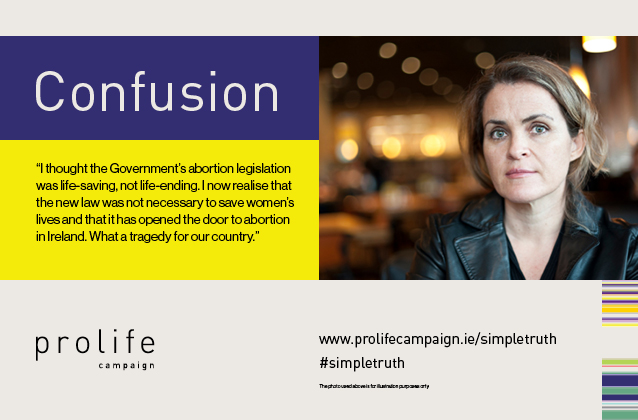 [showhide type=”post2″ more_text=”Read more…” less_text=”Read less…”] The Government misled the public every step of the way before introducing abortion. The law introduced last year was presented as emergency legislation needed to save women’s lives. If this were true, it wouldn’t have taken a full year until July 2014 to draw up the guidelines for doctors on implementing the law. The truth is the legislation was never about life-saving treatments. It was always about Fine Gael capitulating to the Labour Party, who had campaigned for 20 years for an abortion regime in Ireland.

Based on the frenzied coverage in the lead up to the legislation, one could be forgiven for thinking that Ireland, without abortion, was among the most dangerous countries in the world for pregnant women. The truth is that out of 171 countries Ireland has been consistently in the top five for women’s safety in pregnancy over the last 25 years. That’s a stunning statistic. And that world class care was delivered by medical professionals in this country without recourse to abortion.

Trends in Maternal Mortality (1990 to 2010, WHO, UNICEF, UNFPA) is reliable research that allows us compare the rates around the world according to the same criteria and using the same method over a twenty year period. It finds that over the ten year period, Ireland was in the joint fifth group of safest countries in the world for women in pregnancy with an average maternal mortality rate of 6 maternal deaths per 100,000 live births. Over this period, our maternal mortality rate was half that in Britain and under a third that in the US. Over the same period, furthermore, our maternal mortality rate fell by 12% while the rate in Britain rose by 23% and in the US by 65%.

Ireland’s maternal mortality rate during this period was a striking testament to the appropriateness of the principle underlying the practice of Irish medicine in relation to women in pregnancy, in stark contrast to the dramatically poorer records of Britain and the US both of which had wide-ranging abortion regimes.

The tragic death of Savita Halappanavar was misused, massively and continuously, by major players in politics and media who were more concerned with getting abortion legislation over the line than accurate reporting.

Three comprehensive official reports showed that the real cause of the tragedy in Galway was a catalogue of medical errors and not the non-availability of abortion in Ireland at the time. The Government never bothered to set the record straight in light of these reports. Those who pushed the distorted version of the story hardest from the start were happy that they had hard wired a false account into people’s minds and they weren’t going to disturb that.

In voting for abortion, Fine Gael Oireachtas members also broke a solemn pre-election promise to the electorate that they not introduce abortion.

What it all amounts to is proof that something is rotten at the heart of Irish public life. We have to look for a new kind of politics led by politicians who have a track record of keeping their word.

When the chips were down last year, we saw members of the Oireachtas like Lucinda Creighton with the guts and conviction to break rank with their parties. They paid the price for voting according to their conscience and against the abortion law.

It is to these courageous members of the Oireachtas that we look to rebuild trust in our politics, not to politicians who voted for abortion and then the eve of the recent local and European Elections tried to pull the wool over people’s eyes with carefully-timed public interventions seeking to win back pro-life votes.
[/showhide] 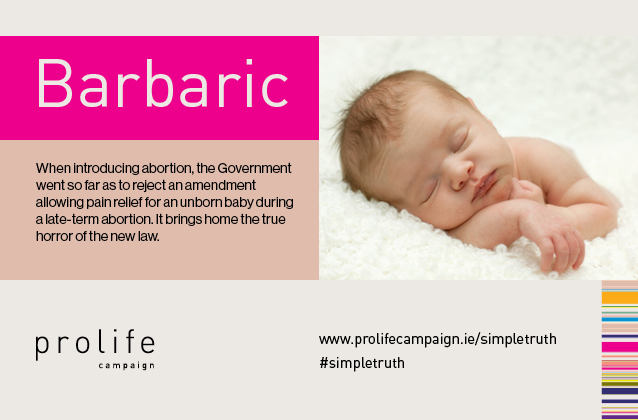 [showhide type=”post3″ more_text=”Read more…” less_text=”Read less…”] Not only did the Government introduce abortion throughout the full 9 months of pregnancy, they also turned down an amendment ensuring pain relief would be administered to unborn babies during late-term abortions. This is cruelty beyond words. It’s also another reminder of what the true intent behind the law always was – the introduction of abortion, not life-saving treatments.

The debate over pain relief provision for babies subjected to late-term abortions has been raging for some time internationally.  It presents a dilemma for diehard pro-choice advocates who recognise that once provision for pain relief is granted in this regard, the public perception of abortion would inevitably change.  What once could be called a “service” or a “woman’s right” is suddenly seen in its true colours – a means of ending the life of an unborn baby at a stage when he or she is fully sentient.

The Government was no doubt fully aware of this predicament.  Even though all drafts of the legislation provided for abortion during the full 9 months of pregnancy, there was no mention of any pain-relief provisions at any point in the debate.  The attempted amendments by pro-life politicians in this regard were forcibly voted down.

For most people, the idea of a late-term abortion is too upsetting to even think about.  Many people who support abortion in certain circumstances would draw the line at late-term abortions or would at least accept that the pain threshold of an unborn baby reaching full-term should be taken into account and given an anaesthetic.

The callous way the Government approached this aspect of the legislation is both chilling and revealing.
[/showhide] 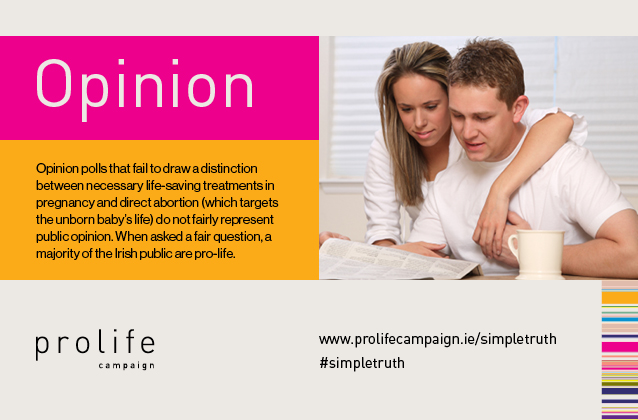 [showhide type=”post4″ more_text=”Read more…” less_text=”Read less…”] The Government’s push for abortion in 2013 was helped hugely by elements in the media who deliberately published distorted and contradictory opinion polls on the issue.

Opinion polls making clear the distinction between life-saving treatments in pregnancy and induced abortion (that targets the baby) elicit completely different responses to polls that regularly appear in some daily newspapers.

The skewed media polls claiming public support for abortion impacted significantly on the debate last year as they helped create a false impression that there had been a dramatic shift in public opinion away from the pro-life position in favour of abortion.

Polls that make the distinction clear between life-saving treatments in pregnancy and induced abortion (where the life of the baby is deliberately ended) reveal consistent majority support for the pro-life position.

A poll carried out by Amárach Research in 2013 found that 60% of people oppose abortion in the case of threatened suicide.

It’s an undeniable fact that polls like this receive far less media attention than the pro-choice skewed polls. This is something that needs to be challenged and highlighted again and again.
[/showhide] 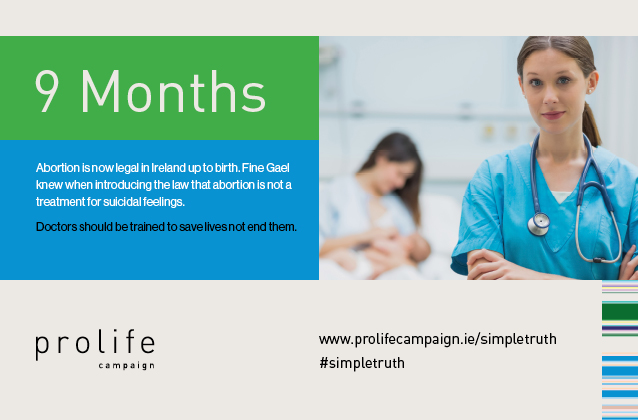 [showhide type=”post5″ more_text=”Read more…” less_text=”Read less…”] The abortion law introduced by Fine Gael and Labour in 2013 sanctions ending the life of an unborn baby throughout the full nine months of pregnancy.

For the unborn baby at 22 or 23 weeks, already fully formed, needing only a week or two to reach viability and a fair chance to reach birth and citizenship, the law, incredibly, offers no protection against being legally killed.

For the baby on the cusp of viability from around 24 weeks on the law again proposes a medically contraindicated and unnecessary early induction that puts the baby at risk of serious harm, such as brain damage, blindness or even death.

Despite the claim that the life of the baby is protected, the reality of the law is that where the woman insists that it is the existence of the baby, and not just the pregnancy, that is the cause of her suicidality, her insistence will override the baby’s right to life every time, even though the procedure is not based on any medical evidence whatsoever. In such a situation, under the law, abortion is permissible up to birth.

All of this highlights the astonishing lack of consideration for the unborn child by those in government who championed the new law. It is shameful beyond words that some politicians even have the nerve to call the legislation ‘pro-life’.

At 12 weeks, the unborn baby can close her fingers, curl her toes and clench her eye muscles.  Her ears are present and are almost in their final positions.  Organs like the liver and kidneys are already working.

At 18 weeks, she can kick, flex, reach, roll and suck her thumb.  Her blood vessels are clearly visible through her skin.

At 19 weeks, she is moving in the womb and doing backflips.

At 20 weeks, she is swallowing on her own.

At 21 weeks, her eyebrows and eyelids have developed.

At 22 weeks, she has the first signs of her baby teeth.

At 23 weeks, she can hear music and it is at this stage that expectant mothers are told to play music to their baby because it will stay with them beyond birth.
[/showhide]

In order to be able to share  the simple truth about abortion far and wide we need your support! Please consider donating today.