Chaos and Confusion at the Citizens’ Assembly 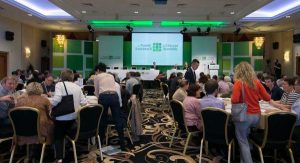 In the end, the words that weren’t spoken mattered just as much as those that were, perhaps even more so.  When various speakers from the top tables finished a lengthy explanation on the last weekend before asking the members “is that all clear now?” the baffled look on many faces as the RTE camera scanned the tables showed that actually, things were not clear at all.  At times, the lack of clarity was the only thing that was clear, but no matter.  It was time to move on.

One of the overriding features of this shameful process has been time.  It’s time for change.  Time to move on. Time for the last question.  Time to decide the ballot’s wording.  Time to vote.

When did we get to be in such a hurry to decide on removing a law that has saved human lives?  After all, that’s what it’s all about at the end of the day and if time was one defining feature then surely another had to be the complete reluctance of this Assembly to actually look at the Eighth Amendment for what it has done in terms of saving lives in Ireland.

Even those who utterly oppose the continued inclusion of the Eighth Amendment in the Constitution can’t be blind to what it has contributed to our society.  This part of the discussion, at least, is logical. If the Eighth is the reason why women can’t have abortions in this country, then the result is that some abortions haven’t taken place.  In those cases, people have been born.  They’ve gone to school, settled down, had their own children. They’ve been living their lives, thanks to the Eighth Amendment.  How many of those people are there?  Conservative estimates put the figure at 100,000, but in one sense the actual figure doesn’t really matter.  Once you accept that at least one human being is alive thanks to the effect of the Eighth Amendment, then it takes on a whole new image.  It’s a life-saving provision, and it should be treated with the respect that entails.

There was no such respect at the Citizens’ Assembly.  Instead, this was a grubby exercise not worthy to lay claim to the title “deliberative democracy”.  Having sat through the proceedings, I think this became clearest for me on the Saturday of the final weekend and the explanation of why a time limit of 22 weeks had been chosen.   Firstly, the members were told that when preparing the ballot paper, particular attention had been given to the presentation of the British Pregnancy Advisory Service (why the UK’s largest abortion provider should have been given a platform as an “impartial expert” should be the subject of much discussion in the weeks ahead).  Leaving that aside, the fact that BPAS facilitates abortion to birth raises questions as to why their presentation would have anything to contribute to the question of time limits.  But then, things got much worse.

When asked why a time limit of 22 weeks had been chosen, one of the panellists explained that this was due to take account of the fact that if abortions were allowed after this date, then there was a significant chance that the baby would be born alive and so to prevent that, he or she would have to be given an injection of potassium chloride through the heart to stop it beating and prevent a live birth.

The mere idea of injecting a defenceless baby’s heart with poison goes against the grain of what the Irish public is about.  You just have to look at the efforts that are made to campaign for better care for families, for premature babies or disabled children, to know that this kind of thing is not what we do.  But once again, the Citizens’ Assembly didn’t provide any time for more discussion, or reflection on something so awful that even seasoned pro-choice campaigners refuse to accept that it is a hallmark of abortion practices in countries like the UK.

Poisonous injections have no place in democracy.  They never have done, and just because we slap an official coat of paint over this charade doesn’t make it any less of a failure in terms of human rights protection.

Not just a failure for human rights, but a failure in terms of conducting an informed discussion.  The fact remains: the members were ill-informed by the end of the process to make the kind of vote they were presented with, yet those in charge of the Assembly pressed on regardless.

To witness the kind of confusion I’m talking about, you only have to view the videos, available on the Citizens’ Assembly official YouTube channel.  It’s all there in the questions from the members themselves as they struggled to get to grips with the many new options that were being added at late notice.

“Are we going to have to go through all of this again tomorrow?” asked one.

“I know what I want to do but I’m so confused now I don’t know how to get it,” pointed out another.

“There should be restrictions for sex selective abortions and Down Syndrome,” said another.

This last suggestion was simply ignored by the panel, so it never made it near the final ballot paper.  This was in sharp contrast to the controversial ground of “socio-economic reasons” which was added to the ballot at the eleventh hour, inserted without even an attempt at advising the members how it would operate in practice.

It was left to the Pro Life Campaign to issue a press release highlighting the failings here, and the fact that no-one knows whether the members who voted in favour intended it to be linked to inflation or whether it would operate in different ways depending on the standard of living in different parts of the country.  Who knows?  Certainly no-one on the floor of the Assembly was encouraged to give it any thought and if you’d suggested there was a need to bring in an expert economist you’d have been laughed out of Malahide.

The thing is though, an expert was needed at that point – just as an expert was needed for the vital area of mental health.  None materialised through the entire process and once again the members were left adrift deprived of necessary international evidence and mired in a back-and-forth conversation on Sunday afternoon so convoluted that there was a round of applause when the wording of the ballot paper was finally decided upon.   You have to wonder how families watching online who say their children are alive thanks to the Eighth felt at that moment.  It’s too bad their submissions didn’t merit an invitation to present to the Assembly or the applause might have been more muted.

The courage to discuss

In the fullness of time, much more will be written about the Citizens’ Assembly.  Despite the gushing praise that has been poured on it from some quarters, I suspect that it will come to be seen as that failure I spoke about earlier – failing the principles of deliberative democracy, failing the needs of families who remain grateful to the Eighth for protecting their children, and failing the members themselves due to the lack of real information on which they could formulate their recommendations.

But the ultimate failure of this Assembly is to the future unborn children of this country, who deserved to have their humanity and rights taken more seriously than has been the case over the last few months.  And, it has to be said once more, the ad hoc approach to the area of women’s mental health was nothing short of shocking.  In this time when mental health is rightly given a priority in our public discussions, when will we finally be brave enough to face the reality of what abortion means to a woman’s mental health?

My overriding memory of the days I spent at the Assembly however will undoubtedly be the description of that injection, and the question that remains in your head for so long after – have we really become the kind of society where such a thing could happen and if so, what are we going to do – today –  to pull ourselves together and step back from that kind of inhumanity?

Do you want to get involved in the campaign to defend the life-saving Eighth Amendment?  Contact us today at info@prolifecampaign.ie and find out what you can do.