The Legacy of the 8th Amendment

There are very few laws it can be said with certainty have saved lives. The 8th Amendment was one:

The 8th Amendment of the Constitution of Ireland recognized the equal right to life of the mother and the unborn child. It was approved by referendum on 7 September 1983, by 67%.

Following a referendum held on 25th May 2018, a majority of 66.4% of the electorate voted to repeal the 8th Amendment.

The 8th Amendment helped to created a pro-life culture in Ireland where the humanity and true worth of every human being was fully recognised.

Mary Kenny’s story represents the experiences of countless families in Ireland today. There are so many stories of mothers and parents who contemplated abortion only to change their minds at the last minute. Many people openly say they owe the life of their child to the 8th Amendment.

Having to travel to England meant a few extra days planning and gave them the time to think things through a bit more and decide against abortion. Today, they cannot believe they ever entertained the idea of ending the life of the son or daughter who now means the world to them.

Ireland’s life-saving 8th Amendment served as a beacon at a time when other countries legalised abortion in wide-ranging circumstances. Because of the presence of the 8th in our Constitution, Ireland showed that it’s possible to prohibit abortion and still be a world leader in protecting the lives of pregnant women.

Now that we will no longer have this life-saving beacon in our Constitution, we need to work harder than ever to work together to create a more welcoming and life-affirming environment for expectant mothers and their unborn babies.

A recent independently produced actuarial report compared the number of Irish women who travel abroad to avail of abortion, to abortion rates in other EU countries. It concluded that the 8th Amendment has saved at least 100,000 lives in the last two decades. That’s 1 in every 50 people in Ireland or the population of Co. Kilkenny.

Repealing the 8th Amendment was a very radical and regretful move for our country.  Usually referendums add protection to human rights. By removing the 8th, however, we have stripped unborn children of all meaningful protections.  For this reason, our work is more important than ever. 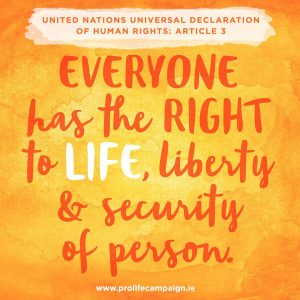 Each human being, regardless of age, dependency, gender, disability or circumstance, possesses a profound, inherent, equal and irreplaceable value and dignity. If as a society we arbitrarily decide to pick and choose which human lives are worthy or unworthy of protection in law, we diminish respect for all human life, born and unborn.